Since seven weeks the lives of Bettina and me have changed in a most wonderful way: Our daughter Katinka has been born. We are very happy. This is real life! There are some pictures.

After a long time in the back burner, here is a new elisp snippet: pom.el enables Java programmers using maven and JDEE for their projects, to compute the JDEE classpath from the maven project.xml file. Download

I have been away

from the computer for some time. No updates to this site. But I had good reasons. Reason number one:

I married the love of my life!

My new wife is the wonderful Bettina Arndt. After nine years of relationship a marriage probably won't change much, but it has been marvelous up to now, and I'm sure it will only get better.

For the nosy ones: there is a (German) part of this site, dedicated to our marriage.

Would you sit in front of a computer screen if you could sit on this beauty, smell the winds and ride into the sunset? 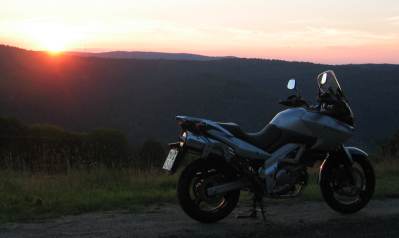 Since I got it, at the end of June, I already put 7000 km on the meter. It's a great bike, a Suzuki DL 650 V-Strom. I can not recommend it high enough. A very powerful V2 engine, excellent handling and a comfortable riding position, what else do you want?

My wife isn't so enthusiastic about biking but I talked her into doing a small tour through southern Germany and the Alps. We had 3 days of nice weather and three cold and rainy days. Tina was freezing bad, despite her neoprene knee warmers, but I hardly noticed anything in my Goretex clothes. Worth their money :-) See some pictures from the Tour.